On the day before the “Super Moon,” hikers enjoyed  breathtaking views of the rising moon and setting sun from the top of King Peak, the highest mountain in the King Range.  This was our second hike in the Summer Hikes Series sponsored by FOLC and the King Range National Conservation Area.  BLM Lost Coast Ranger Justin Robbins and Conan Johnson, a BLM assistant, led the group up Lightning Trail and provided participants historical, geological and botanical information about the area.  Lightning Trail, 3 miles long and climbing 1900 ft., is the shortest trail to King Peak and provides a steady but gradual climb through old-growth forests of the Honeydew Creek basin.  The view from the top is incredible, with the Pacific Ocean almost a stone’s throw to the west and endless rows of forested mountains stretching to the east. 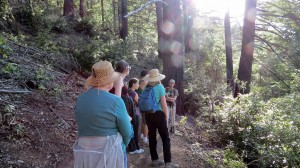 In the 1970s and 80s, the BLM purchased and/or exchanged more than 25,000 acres of lands within the national conservation area under the authority of the King Range Act.  Most of the timber had either been harvested historically, or had been cut just before acquisition.  Harvest methods included high grading, or removal of the best trees, leaving scattered large Douglas fir trees.  Reforestation was not practiced and a large percentage of the previously harvested land was left to regenerate naturally. Tanoak and madrone trees now dominate what had once been old-growth Douglas fir forest.  Several areas were planted after acquisition by the BLM, including the Bear Trap Creek area (125,000 Douglas fir trees on 200 acres since 1985).  Other vegetation in the area includes Knobcone pine, laurel, manzanita, poison oak, blackberry, Oregon grape and salal. 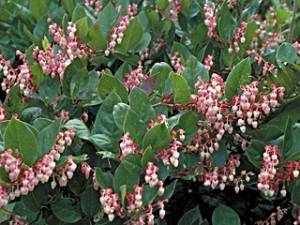 Another important plant found here is beargrass, used by Native Americans both historically and currently for basketry.  Other native coastal grasses include reedgrass (a state-listed rare plant), oatgrass and bentgrass, all of which form the coastal prairie plant community.

If you haven’t been up Lightning Trail yet it’s time to go!  A great hike and unforgettable panoramic views!  And please join us for upcoming hikes!]]>
Posted in Hikes
← The X-Rated Banana SlugVolunteers build trails, restore meadows →