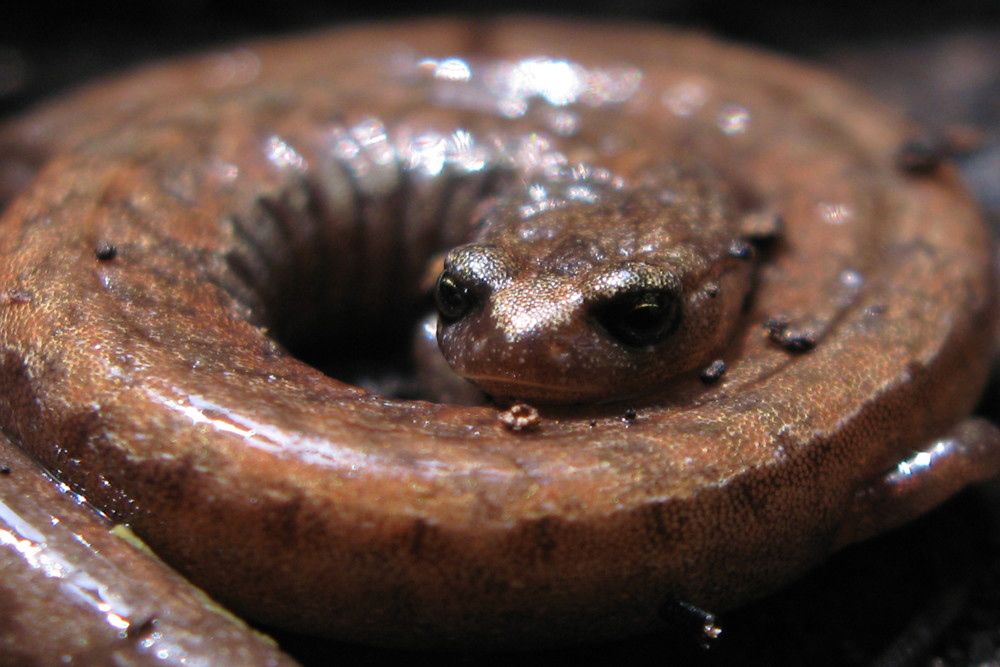 It may look like an earthworm but Batrachoseps attenuates is a miniscule salamander with idiosyncrasies. Two-thirds of its total 2 ½” to 5 ½” length is tail. Its tiny head is narrow and its brown skin is deeply grooved between the ribs, thus completing the earthworm disguise. Unlike an earthworm, they have bulging, front-facing eyes, tiny arms and legs, and a tooth-filled mouth. Batrachoseps are lungless and breathe through their thin moist skin. Unlike other salamanders they have four toes instead of five on each foot. The slander salamander ranges from Washington to Baja California, preferring cool, moist woodlands, oak or conifer, with deep leaf litter and decomposing wood and bark. However they are not too picky, as they have also been found in urban gardens and roadside greenery and valley grasslands. What is essential, especially during the dry season, is a cool moist retreat, often underground in rodent burrows or under rocks or logs. They are usually dormant during the dry season. With such tiny legs, they do not travel far, probably less than six feet from home base. This, along with the fact that they are an ancient lineage suggest what DNA studies have also indicated: What is currently classified as one species, B. attenuatus, has, over time, evolved into 5 or more distinct species by gradually being separated by the building of mountain ranges and the movement of the San Andreas Fault. As scientists learn more, the new species will likely be classified. Batrachoseps can sometimes be found on wet days above ground, but they mostly confine themselves to foraging in the leaf litter, or underground in termite tunnels, earthworm holes and rodent holes. Their forward-looking eyes focus on the prey, which is then snagged with their sticky projective tongue. Prey includes spiders, mites, snails and insects, in addition to earthworms and termites. Little can be said of the sex life of the slender salamander, other than that breeding takes place from December (in the hotter reaches of its range) through January. The females deposit 5 to 20 eggs in subterranean tunnels which may be shared by several females. The eggs are surrounded by capsules connected by strands of jelly; this is presumably to keep them moist for the two months of incubation. There is no aquatic larval phase. The hatched young are miniature adults, although long-legged, short-tailed and big-headed compared to their parents. So what’s the exciting idiosyncrasy? Fish, amphibians, reptiles and birds have large, oval nucleated red blood cells (RBCs). Mammals have small RBCs without a nucleus. Batrachoseps’ red RBCs also lack a nucleus? Why? During its maturation in the bone marrow, a mammalian RBC does have a nucleus (which contains the DNA), but this nucleus is ejected before the RBC is sent into circulation. The nucleated cell is 10x larger than the non-nucleated one, even through the amount of oxygen-carrying hemoglobin is the same. Slender salamanders are extremely small, and it is thought that nucleated RBCs would cause too much friction in the capillaries and possible circulatory problems.]]>