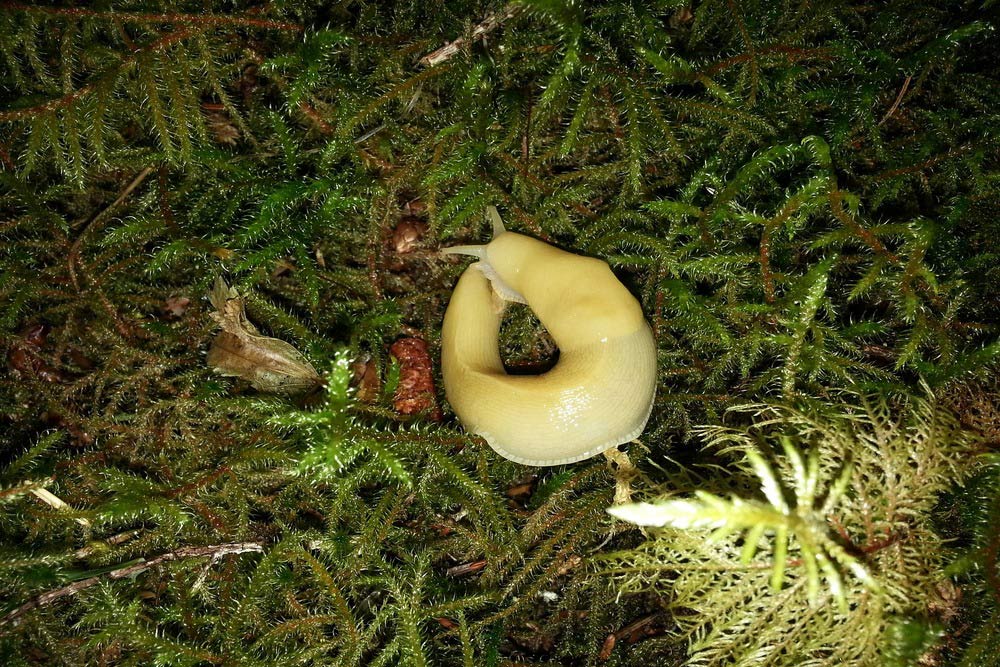 Ariolimax columbianus lives in the coastal rainforests from southern Alaska to Santa Cruz. It creeps along eating mushrooms, leaves, animal droppings and dead plant material, converting these into nitrogen-rich droppings. In doing so, they enrich the soil and spread seeds and spores. In some forests, they are bright yellow, perhaps with black spots. Elsewhere, they can be white, brown, or olive green. The color may depend on the diet. On the “run”, fully stretched out, a slug can be 6” to 8” long. In a more sedentary mode, the slug is more compact, about 5” long. Like their snail relatives, slugs move on a muscular foot running the length of its body. A slime is secreted, chemically intriguing because it provides traction for the muscles to push against and friction-free lubrication for dragging the body. The slime also protects the slug from dehydration, allows the exchange of carbon dioxide for oxygen through the skin, and attracts mates. Predators seldom attack slugs because the slime anesthetizes the moist interiors of their mouths. Garter snakes, ducks, geese, moles, shrews and salamanders may eat banana slugs. Raccoons will roll the slug in dirt to neutralize the slime before eating. The slug’s head sports 4 antennae; the lower two sense chemicals and smells, the upper two, the eyestalks, detect light and movement. All are retractable, and if you watch closely, you can see tiny eyespots moving out to the ends of the eyestalks. On the underside of the head is the mouth, with many rows of teeth to grind the food. Behind the head is a shield – the mantle. On the right side is a hole which leads into the single lung. Beneath the mantle, also on the right side, is the genital pore. And now we get to the exciting bits. Slugs are hermaphrodites: each slug is both male and female, and has the organs to prove it. The male organ is almost as long as the slug, and is normally kept tucked inside the body, only to protrude from the genital pore during mating. The genital pore also leads to the female parts. When two slugs meet to mate, they begin with a few love nips (vicious), and then curl up in a ball, so that each can penetrate the other, exchanging sperm. Fertilization is internal. This coupling can last for many hours. After that, sometimes, they merely decouple and go their separate ways. But other times, for reasons not understood (but easily imagined), one gnaws off the other’s male organ. Often, this mutilation is mutual. In the future, the resultant slug can act as a female, but no longer as a male. Sometimes, sperm are stored until the eggs are ready for fertilization. After fertilization, the 20 or more translucent eggs are laid in dark moist places, in leaves or under logs. Infant banana slugs are really cute. Written by Eve Broughton. Eve lives in Whitethorn and was educated at UC Berkeley  ]]>