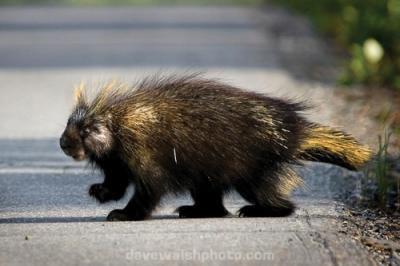 ”Wow! What’s that! Stop the car!” There, alongside the road in Rockefeller Forest, was a porcupine. I haven’t seen one since then, probably because porcupines are mainly nocturnal. During the day they hang out in the branches of trees. At night in the forest, those strange sounds you might hear, grunts, coughs, moans, wails, whines, shrieks and clicking teeth are not a werewolf, but a porcupine. Living in mixed and coniferous forests, porcupines are found in Canada, Alaska, and the northern and western USA. There are also isolated groups in West Virginia and western Virginia, and in shrub lands and deserts south into northern Mexico. Porcupines are known for their spines (quills), which are solid at the base and barbed at the tip, but hollow in the shaft. The quills cover the body and tail (where they are longest), but not the belly. The porcupine cannot “shoot” its quills, but they are easily detached, especially when the porcupine swings its tail. Unless threatened, the quills lie flat against the body. When embedded in a victim, body heat causes the barbed tips to expand. The porcupine’s skin contains antibiotics presumably to prevent an infection if it were to be pricked by its own quills. They are large but stubby rodents: thick body and stubby limbs and tail. Their total length can be 35” and they can weigh up to 30 lbs. Porcupines eat twigs, leaves, roots, stems, berries when available, and tree bark. They are slow moving but bright: they can learn complex mazes quickly and remember these months later. This is an essential trait for the near-sighted porcupines when preferred trees are scattered few and far between. They often den in a hole in a tree or a decaying log, and tend to sleep a lot during the winter. They live a solitary life, but do mate (with their quills held flat to the body), in the fall, and a single infant is born in the spring. The quills are soft at birth, but harden within several hours. The infant will begin to forage for its own food after the first week, even though it will stay with mom for another six months. Prior to mating males may fight over a female. They also perform elaborate dances, and will spray urine on the head of the female. (Wow!) What do porcupines, armadillos and opossums have in common? Answer: their ancestors all came from South America. Paleontologists think that 30 million years ago, the ancestor to caviomorph (South American) rodents rafted across the Atlantic from Africa to Brazil. There, they evolved into many different kinds of rodents including guinea pigs, capybaras, chinchillas, and porcupines. Three million years ago, the Isthmus of Panama rose out of the oceans and connected North and South America. Armadillos, opossums, and porcupines began migrating north, pumas and jaguars to the south. This article is part of a series about natural life on the Lost Coast, sponsored by the Lost Coast Interpretive Association, which may be contacted at [email protected] For photos, educational information and news about the Lost Coast, please visit the Lost Coast Interpretive Association’s Facebook page.    ]]>