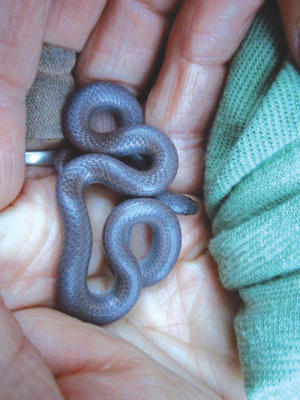 This summer on a warm August night in Salmon Creek, our daughter spotted what appeared to be a large earthworm crossing the road. Upon closer observation, she realized it was a very small snake unlike any she had seen before. She picked the snake up and carried it home, and to our surprise, it was the snake that was highest on our “life-list” priority for North Coast reptiles – the Sharp-Tailed Snake. Sharp-Tailed Snakes (Contia tenuis) spend most of their lives in the darkness of a subterranean world hidden safely underground, beneath rocks, or deep plant litter, where it is cool and moist. Their secretive nature and unique habitat requirements make them one of the most rarely observed North Coast reptiles. In their underground haunts they prey on small arthropods, earthworms, and salamanders, using long teeth to hold onto their slippery prey. Sharp-Tailed Snakes are unique in that they have evolved a sharp, thorn-like spine on the tip of their tail. This spine is presumed to be used like a grip-hoist, holding them firmly in place while extracting earthworms and other creatures from their burrows. Sharp-Tailed Snakes can be active at much cooler temperatures than most snakes (50 deg. F) and may occasionally be spotted traveling above ground, mostly when moisture is present.

One of the smallest species of northwestern snakes, adults range in size from eight to twelve inches in length and are quite slender. Adults are brownish red or gray, with alternating crossbars of black and white, light cream, or gray on their bellies. Juveniles are reddish in color with dark lines on the sides. At first glance this snake might look like a juvenile Rubber Boa, but their blunt nose, spiny tail, and bold ladder-like striped pattern on their bellies help to distinguish its uniqueness. Sharp-Tailed Snakes utilize a variety of habitats: grassland, chaparral, oak woodland, and coniferous forest. They range from sea level to 6,000 feet and are found from British Columbia to San Luis Obispo and east to the Sierras. Another species of Sharp-Tailed Snake (Contina longicaudae) can be found in the same range, but is mostly confined to coniferous forests. This species is differentiated by its longer, scalier tail. The next time you see what looks like a jumbo-sized earthworm crossing the road, look twice – it may be a Sharp-Tailed Snake. Kyle Keegan lives with his wife and daughter in the Salmon Creek watershed. He has conducted research for the National Science Foundation, Cornell Lab of Ornithology and contributes bird recordings to the Macaulay Library of Natural Sounds. He regularly leads hikes related to ecology and land stewardship for Sanctuary Forest and the BLM. This article is part of a series about natural life on the Lost Coast, sponsored by the Friends of the Lost Coast, which may be contacted at [email protected] For photos, educational information and news about the Lost Coast, please visit the Friends of the Lost Coast’s facebook page.]]>