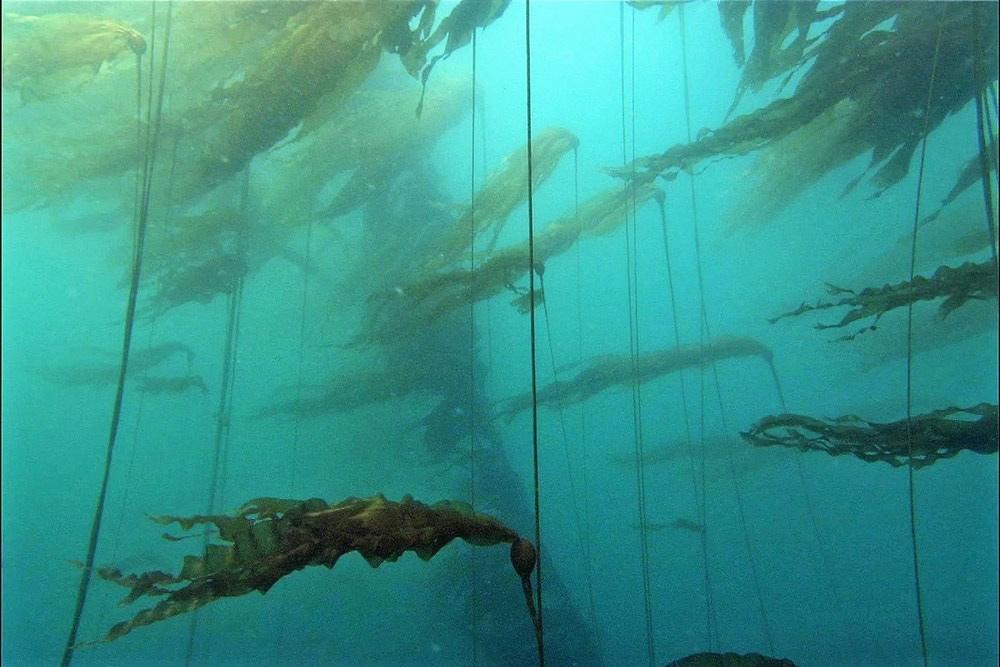 How amazing that something can grow up to 150 feet in one year! Bull kelp and giant kelp are the fastest growing seaweeds in the world and can grow up to 2 feet per day. Bull kelp is especially amazing because it is an annual; germinating, growing, reproducing and dying all within a one-year cycle. Bull kelp grows in large patches called kelp forests off-shore from San Luis Obispo County to the Aleutian Islands, preferring colder water than the giant kelp. It is the predominant ‘big’ seaweed along the Lost Coast.   Growing from sporophytes in the spring, bull kelp forms holdfasts that act like roots clinging tight to rocks and cobble on the ocean floor. Holdfasts must be strong in order to hold on in the rough and tumble subtidal zone. From the holdfast extends the stipe, a hollow stalk that grows all the way up to the surface. At the surface the stipe enlarges into a gas filled floatwhich keeps the seaweed upright. As many as 60 blades grow from the top of the float, absorbing nutrients and sunshine, and forming the brown ‘rafts’ of seaweed that we see from the shore or a boat. Spores form in patches on the undersides of the blades and in fall, sink to the ocean floor. By winter, bull kelp is spent. Storms wash it to shore where we humans pick it up and twirl it around like a bull whip, hence the common name.   On the surface, kelp forests calm the water and provide resting and feeding areas for sea otters, gulls, herons, shorebirds, and waterfowl. Kelp forests soften the force of waves against the shoreline, helping to reduce beach erosion. Underwater, kelp forests provide shelter and habitat for young fish, snails, crabs, sea stars, anemones, and many other creatures. When washed ashore in winter, the decomposing kelp provides food and shelter for scavengers like crabs and beach hoppers, which in turn are food for shorebirds and other life.   Bull kelp is full of vitamins, minerals and protein. It was used by the Pacific Northwest Coast Indians for food, fishing gear and storage containers. Kelp must be harvested responsibly to protect it from depletion and to preserve its ecosystem. Because it requires clean, clear water to thrive, polluted coastal runoff and warming oceans due to climate change threaten the species.   The California Coastal National Monument encompasses all the rocks and small islands off the 1100 mile California coastline, protecting their scenic beauty and wildlife habitat. The Coastal Monument is part of America’s National Conservation Lands. It is here that bull kelp thrives.     Cheryl Lisin is a landscape designer and native plant enthusiast who lives in Whitethorn.  ]]>

Posted in Flora, Nature Articles, Uncategorized
← Manzanita Blooms in WinterWhitethorn And Its Kin →