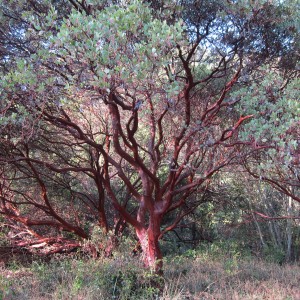 One of California’s most beautiful shrubs, manzanita, blooms in winter. If you happen to be near a blooming manzanita plant, you are likely to see and hear Anna’s Hummingbirds, who stay for the winter rather than flying south, feeding on the flower nectar. Outliers can bloom here in Southern Humboldt as early as December and as late as May, but most bloom in February and March. Blooming at a time of year when food is scarce, manzanita flowers are an important source of pollen for butterflies, bees and other insects. Once pollinated, the fruit or berries, which resemble little apples form. The name manzanita means little apple in Spanish. Berries are a good source of food for birds and bears. If you come across bear scat it is likely to be full of manzanita berries (unless the bear just raided your apple tree!)   H 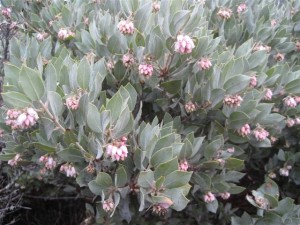 umans have uses for manzanita as well. The fresh berries can be eaten or made into cider. Dried berries make a nutritious meal or porridge. A tea made from the leaves is said to help reduce poison oak rash. Recipies and information on traditional uses by native people as well as modern uses can be found by searching on line. In the garden, manzanitas make strikingly beautiful specimens, especially if pruned to reveal their sinewy branches .   The genus name for manzanita is Arctostaphylos, which means bear berry in Greek. There are over 40 Arctostaphylos species native to California. Three species grow here, Arctostaphylos manzanita, common manzanita, Arctostaphylos columbiana, hairy manzanita, and Arctostaphylos uva-ursi, kinnikinnick which is a ground hugging species. Both common manzanita and kinnikinnick have deep green leaves. Hairy manzanita has fuzzy grey-green leaves and fuzzy stems. Manzanita flowers are usually pink, but some plants have white flowers. All have striking smooth red-brown bark that peels in mid-summer to reveal green bark underneath, which quickly darkens to red-brown. Manzanitas are in the heath family, Ericaeae, and are related to madrone, huckleberries, blueberries, salal, rhododendron, azalea, heath and heather. 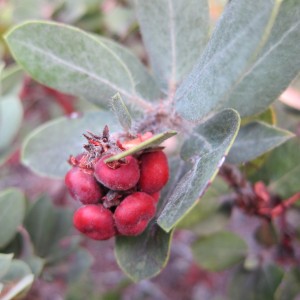 Usually found in chaparral, grassland or forest margins, manzanitas are sun lovers. Like their close relative, the madrones, they will reach toward the suinlight if they become shaded out by other plants. Older manzanitas can reach 20 feet tall. They sometimes sweep the ground, rooting where the branches make contact with soil. Many forested ridges in the area have old dead manzanita branches lying about, indicating that the ridge was once grassland. Due to lack of fire, the manzanitas were able to move in to the grassland, only to be shaded out by the fir and tan oak forest that moved in later. A great place to see hairy Manzanita is up on the Chemise Mountain trail, just south of the overlook, in the King Range. Here they are growing with knobcone pine and chinquapin, which will some day shade out the manzanitas.   Manzanitas are such abundant bloomers and all around great plants – its no wonder the Anna’s hummingbirds don’t fly south for the winter.   Photos and text by Cheryl Lisin, a landscape designer and native plant enthusiast who lives in Whitethorn, Ca.  ]]>

Posted in Uncategorized
← The PlanarianBull Kelp Grows at an Amazing Rate →