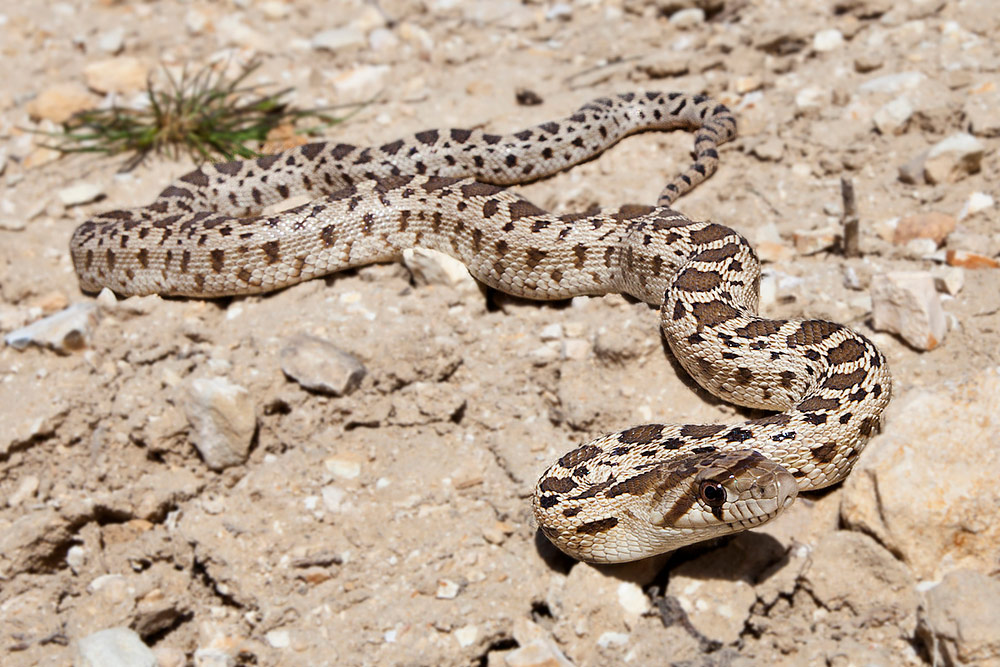 Pituophis catenifer As youngsters, my brother and I had a terrarium built by an enterprising neighbor who had invented a fly trap which collected live flies. On a family camping trip to the High Sierras, we collected lots of fence lizards (and live flies to feed them), and then, the big prize, a juvenile gopher snake. The morning after we put the snake in the terrarium with the lizards, disaster struck. The snake, which probably thought it had been put in heaven, was caught swallowing a lizard. How could it do such a terrible thing?! I guess we forgot that snakes eat live prey. Snake was immediately banished from heaven. At first glance, a gopher snake could be mistaken for a rattlesnake. Both snakes share a light brown background color with a series of darker brown to black blotches along the center. In the diamond-back rattlesnake, these blotches are surrounded by white stripes, creating the diamond pattern. There is no white on the gopher snake. Instead, below the center blotches on the sides are smaller dark spots in a variety of shapes. The rattlesnake’s tail pattern is a series of black and white stripes whereas the gopher snake’s is light brown with small dark spots. The visual mimicry is also accompanied by behavioral mimicry. The rattlesnake has a large triangular head whereas the gopher snake’s head is more rectangular and thinner, although when threatened, it will flatten its head into a more triangular shape. It will also puff up its body, coil into the familiar rattlesnake strike pose, shake its tail (no rattles here, though) and hiss menacingly. If the gopher snake does strike, it will do so with a closed mouth. For all this threatening behavior, the gopher snake is not poisonous. Gopher snakes are fairly large: 2 ½ to 7 feet in length. Even hatchlings can be 20” long. In spring, males engage in ritual combat, wrapped around each other. The winner mates with the female. Sometime between June and late August the female will lay a clutch of 12 to 14 eggs. These incubate 8 to 10 weeks before hatching. The Pacific Gopher Snake lives 12-15 years in the wild, feeding every ten days on small mammals, birds, eggs, lizards and frogs. (We should have known this before we put the snake in with the lizards!) They often hunt during the day, although they may be active at night during very hot weather. Pacific gopher snakes range from Canada to Mexico, west of the Cascades and Sierras . They prefer drier open country (deserts, shrublands, grasslands and coniferous forests) to damp, dense forests, and range up to 9000’ in altitude. Written by Eve Broughton. Eve lives in Whitethorn and was educated at UC Berkeley.  ]]>

Posted in Amphibians and Reptiles, Fauna, Nature Articles
← Native Plant Workshop coming in AprilAutumn, She Shall At The Very Least, Be Adorned In Gold →