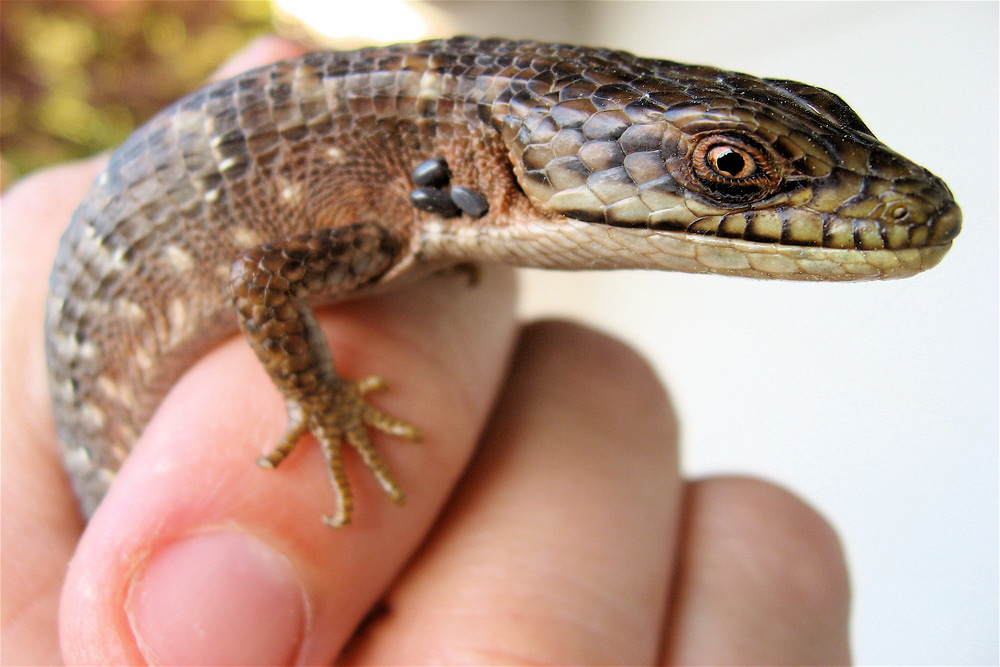 The other morning, there were 2 alligator lizards basking in the sunlight on a window sill, and another hoping to get out the nearby door. The cat had brought them in. I decided to evict them. Two were sluggish or cooperative, but the other raced around and then hissed at me and bit me as I tried to pick him up. He held on like a pit bull. He had recently lost his tail and was probably not in a good mood. Should you wish to pick one up, grasp it behind the head. Outside, I saw 5 or 6 within a 40’ stretch of garden. Obviously, previous years were great for alligator lizard survival and reproduction. Unlike many reptiles, alligator lizards are ovoviviparous: after mating, the eggs are retained in the female’s body. Usually there are 2 or 3 eggs. The fetuses get nourishment from the egg yolk. When they are developed, about 2 months after mating, the young “hatch” and are soon born. It will take about 3 years for females to reach sexual maturity. The young are, about 3” long, thin and have smooth shiny unpatterned light brown skin; they look like small skinks. As adults, alligator lizards can be 10” long, with 6 of that being tail. Their heads are flat and triangular with pointed noses. Behind the eyes, their body slowly and slightly widen, without noticeable neck, until the middle of the abdomen, and then taper gently to the end of the tail. Legs are small and thin. There are 5 fine toes on each foot. In California, there are two species of alligator lizard. Both can be found in our area. The Northern species (Elgaria coerulea) can be distinguished from the Southern species (Elgaria multicarinata) by eye color and belly striping. Northern has dark eyes and a dark stripes running between the scales. Southern has light eyes and dark stripes on the middle of the scales. Both are brownish, buff, or olive-brown on top, with darker crossbands. The scales are large, keeled, and slightly shingled. Separating the back from the belly, and running the length of the body from behind the corner of the mouth to the tail is a lateral fold of skin. The belly is usually light gray, and the scales are flat and shiny. Alligator lizards occupy a variety of habitats, but they prefer moist areas and avoid deserts. Nor do they bask in sunlight in the open, as other lizards do. When they sun, there will be cover very close by. These pugnacious lizards are nice to have in the garden. They eat insects and grubs, snails, ticks, mites and spiders, and millipedes, and sometimes infant rodents. Eve Broughton was educated at UC. Berkeley and lives in Whitethorn.  ]]>