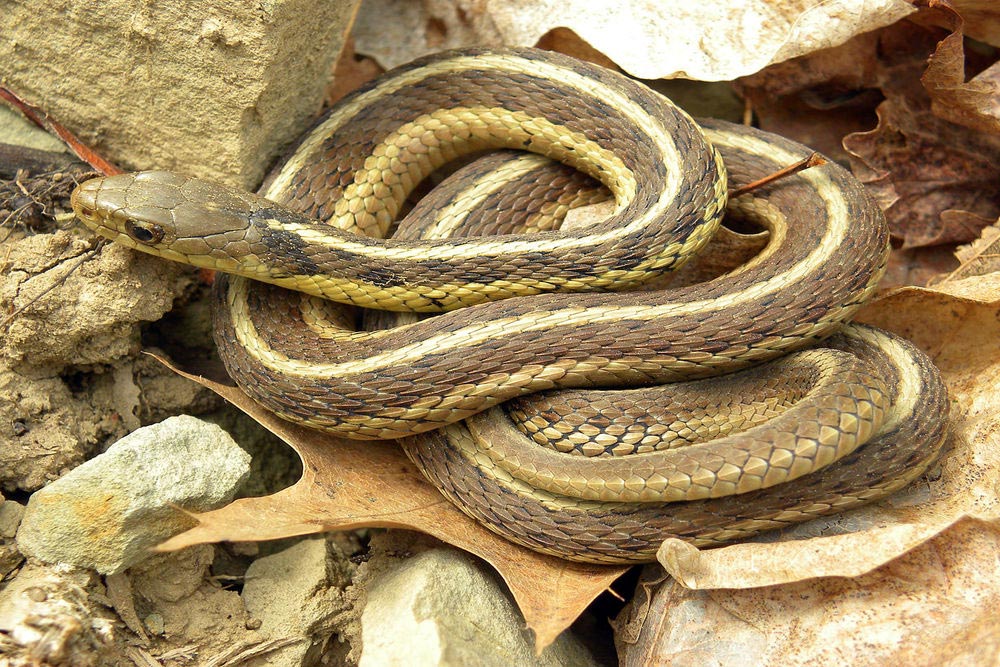 In the late fall, as sunshine becomes rare and temperatures drop to freezing, garter snakes make their way to the hibernating den. Hundreds can gather in this hibernaculum, keeping each other warm. As garter snakes are slender and cold-blooded, they lose heat rapidly and this communal sleeping is necessary to conserve heat and fat stores. Male and female snakes make sex-specific scents (pheromones) in their skin, allowing a snake to follow the trail of another snake. Some males make both scents, and this is an advantage, attracting both males and females to cluster around them in the hibernaculum. These “kleptotherms” also have an advantage in breeding. Maybe because they’re hotter. Male snakes are smaller than females. In spring, when temperatures warm the hibernaculum, they wake and wander outside to feed and bask in the sunshine, returning at night to the group warmth. Soon, however, they stop feeding and allow their digestion to complete, as mating season is about to begin. When a female awakes and leaves the den, her pheromones attract many males, all trying to mate with her, swarming around her in a mating ball. The female incubates the young in her lower abdomen for 2 to 3 months, and gives birth to 10 to 30 live young in the late summer. The young, 6 to 10 inches long, shed their skin and begin to hunt on their own, seeking earthworms, invertebrates, small fish and tadpoles . Living on a ridge, I see many small garter snakes at this time; the birthing chamber must be nearby. Sometimes, females mate again in the fall, and store the sperm until the spring to begin another fertilization and incubation. Garter snakes are usually 2 to 3 feet long, brownish in overall color, with lengthwise stripes of several colors: red, yellow, white or beige. In between the stripes are rows of dark blotches. The snakes are active during the day, using their eyes to spot prey and their tongue to sense taste and smell. They can also sense ground vibrations. We usually associate garter snakes with streams and their favorite food, frogs, but they are generalist carnivores, eating earthworms, fish, lizards, slugs, ants, and small rodents. Some species are immune to the toxin in newt skins and eat them too. The prey is swallowed alive. Garter snakes have a mild neurotoxic venom, which is produced in small amounts, and delivered via some larger teeth in the rear of the mouth during the chewing – swallowing process. So unless the garter snake tries to swallow your finger, you have little chance of getting poisoned. Predators of garter snakes include king snakes, kestrels and kites, harrier and hawks, mink and raccoon, opossum and skunk, and domestic cats. A garter snake will coil and strike to protect itself, although the usual reaction to a threat is to hide its head and shake its tail. It will also release a nasty-smelling juice from a cloacal gland. Written by Eve Broughton. Eve lives in Whitethorn and was educated at UC Berkeley  ]]>